About the Ness Brothers

Originally from the same dairy farm in Winchmore, the Ness Brothers – Matt, Simon and Jerard – established their own operations in 1997, but they still work as a team. Matt farms 435 hectares with 1,050 cross-bred dairy cows. 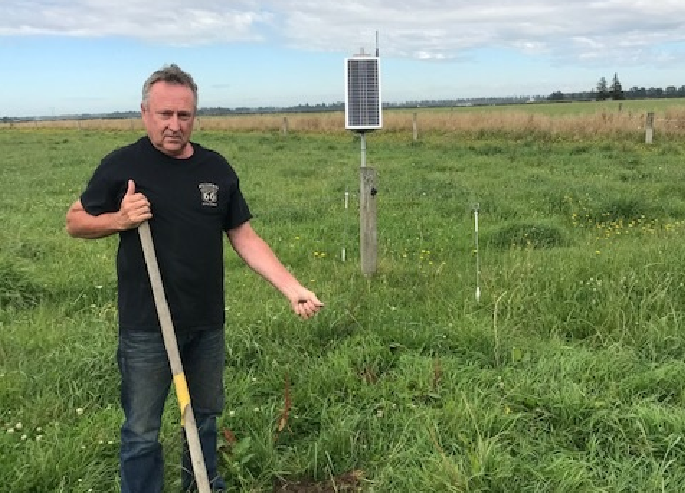 Each brother needed to have compliant Farm Environment Plans (FEP) and that meant installing soil moisture temperature probes. They also wanted to gain efficiencies around their irrigation, as well as improve their decision-making over when and how much to irrigate.

Watermetrics soil moisture and temperature sensors (SM/T) were installed first on Matt’s farm, and then on the other two brothers’. The data would ensure they’re FEP compliant, as well as giving them the information they need to irrigate more efficiently.

Since the sensors have been implemented, Matt and his brothers have seen major efficiency gains around their water use. This is crucial during hot summers – as 2019/2020 has been – because they can use the data from the probes to conserve water where possible and avoid over-irrigation. Being able to analyse the soil temperature has been crucial for irrigating as efficiently as possible.

It all started with a few simple questions about soil moisture probes and how they could improve efficiencies around irrigation. Watermetrics were replacing Matt Ness's out-of-date Aquacom loggers with new LoRa IoT units when the subject came up.

Matt Ness's 435 hectare dairy farm is located in Winchmore. Originally a family concern run with his two brothers, Simon and Jerard, the three launched their own operations in 1997, but they still collaborate over operational decisions.

Matt's herd is made up of 1,050 cross-bred dairy cows, and like most dairy farmers, he's on a Farm Environment Plan (FEP).

The need for a solution that would address compliance and efficiency

"I'd been to a few workshops on soil moisture probes, and with the audits we needed to have them," he recalls. "They're essential for compliance and I also wanted to find ways to gain efficiencies around irrigation. I looked at a few different options, then Watermetrics came out to the farm to replace the loggers."

While this was happening, the talk turned to the FEP audit, soil moisture and when-to-irrigate decisions. With Watermetrics new LoRa network, Matt had the option of adding new soil moisture sensors. "I was quizzing them about the different probes, prices - what would be the best bang for our buck," Matt says. "Some of the other options I'd looked into were a bit dearer. I wanted something more cost-effective that was also simple to understand, so that I could make faster decisions around water use."

Matt goes on to say that the hot summer meant he wanted a better grasp on what was happening with the soil moisture levels. "Obviously with it being so hot, you naturally think of putting more water on," he explains. "That can have the opposite effect to the one you want. The idea is to lower the amount, but irrigate more often."

The discussion continued around costs, installation and use, and Matt made the decision to implement the probes. The Soil Moisture and Temperature (SM/T) sensors mean that farmers can: Matt's first impression of the sensors were how easy they were to install. "Watermetrics came to the farm and just put them in - it was so simple," he recalls. "That was a big thing for me. And they're solar-powered, and easy to use."

After Matt had installed the probes on his farm, his brothers Simon and Jerard followed suit on theirs. Although the probes haven't been in operation as long, the data they're providing has been helpful and informative.

Matt goes on to say that the information provided by the probes is easily accessible and that it's something he's checking daily. "I didn't have that kind of up-to-date data before," he explains. "So we weren't applying water as efficiently as we should have been, and this hot summer hasn't helped. But because we're getting this data almost in real-time, we can look at what the temperature is and make much more informed decisions about how much to irrigate, and when. We're able to conserve more than I thought we could, and of course, we're now FEP compliant as well."

"We'll be irrigating a lot less," Matt says. "Even though it's been hot, we have had small pieces of rain and it's made a difference that the sensors pick up on in terms of soil moisture. What it's telling us is that we can use less water, and what we are using is being applied more efficiently. That's key for us - not over-irrigating. And it's less wear and tear on pivots and other irrigation equipment as well."

In order to augment the probes, Watermetrics are now fitting rain gauges on the LoRa network on the Ness farms. "They're electronic gauges that you bang on a post, and they're data-linked," says Matt. "They provide information on all rainfall - hourly, daily, monthly, annually - which ties in with the data we're getting from the sensors, and that's also been really helpful in terms of irrigation decisions."

"It's interesting to see the different levels in the soil - where the moisture percentage is," Matt continues. "When we irrigate, we can see if it's going straight through or just on the top 200ml. We don't want it going straight through; that's how nitrate leaching happens and it's something we really have to pay attention to."

When asked about the service provided by Watermetrics, Matt's response is swift. "They're a top business," he says. "What Bruce has brought to the table has been fantastic. Very responsive when I've had questions. Initially when we installed the probes, I wasn't sure what I was looking at, and he came out and explained it all to me. He's helped us gain a thorough understanding of what's going on and how to use the data effectively. Bang for your buck - the Watermetrics probes are more cost-effective than anything else out there, and you're getting exactly what you need to make water use as efficient as possible."

An Arthur D Riley company, Watermetrics provides a total solution to any water consent holder, providing services that include highly qualified, industry leaders combined with efficient, accountable water management. Watermetrics offers an umbrella of expertise and the assurance that the job will not only be done from start to finish but that back-up support is no more than a phone call away.

Find out more about Watermetrics and farm sensor monitoring.

“Bang for your buck - the Watermetrics probes are more cost-effective than anything else out there, and you're getting the information you need to make water use as efficient as possible.”